BFFs WENDY SHANG AND MADELYN ROSENBERG REVEAL WHAT'S ON THEIR FRIDGES, PLUS A FEW OTHER THINGS!

What better time than "Valentine's Day month" to celebrate friendship.  So, today I'm honored to acquaint you with two uber-talented children's book authors and fellow book-writing critique group members, Madelyn Rosenberg and Wendy Shang.  As an added bonus, they will answer the burning question, "What's on your fridge?"


Tell me about yourselves.

Madelyn:  I grew up in Blacksburg, Virginia, and after college in North Carolina I went back home and became a reporter for the Roanoke Times.  In 2000, I went back to grad school in creative writing at Boston University, and eventually landed here in Northern Virginia.  My first two picture books, The Schmutzy Family (Holiday House) and Happy Birthday, Tree: A Tu B'Shevat Story (Albert Whitman & Co.), came out just this past September.  My first middle-grade novel, Canary in the Coal Mine, is due out in April with Holiday House. 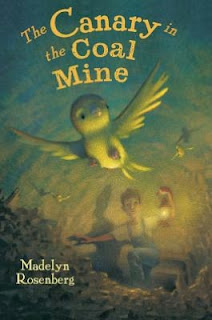 What I like most about writing:  The freedom (though sometimes it's too much for me and I don't manage my time the way I should).  And I love that it gives me a reason to feel justified for eavesdropping on people.
Wendy:  I grew up in Northern Virginia, and went to the University of Virginia for undergrad and law school.  As an attorney, I worked on access to quality counsel issues in the juvenile justice system for the American Bar Association.  After the first of my three children was born, I decided to stay at home,
and began writing when me third child was six months old.  My first book, The Great Wall of Lucy Wu, was published by Scholastic in 2011.  What I love about writing is that it fills a creative need for me, while providing a way to look at the world.
How did you two meet?  Was it in our writing group?

Madelyn:  I remember congratulating Wendy on winning a grant from SCBWI, just before she joined our writing group.  It was at the fall conference and I think she was carrying a Hefty full of garbage at the time.  But writing group is where we became friends.
Wendy:  I was a bit intimidated after going to my first writing group, but Madelyn sent me a very kind note, saying not to be scared and giving me lots of encouragement.  Little did I know it would be the first of many, many e-mail exchanges between us!
Madelyn:  I have saved a huge number of Wendy's e-mails, though not all.  Currently, on my computer, I have 1,227.)

Madelyn:  Wendy is wide open and true -- I think that's the word I'm totally looking for.  She has an easy laugh that I love and I confess to being totally jealous of her writing ability, particularly the way she can squeeze so much emotion out of the simplest sentences.  She also gives good advice such as:  stop obsessing.
Wendy:  Madelyn is wicked smart, funny and incredibly generous.  She never takes the easy way out.  Madelyn is also a trained journalist, which means that she knows how to listen with an open mind and ask the next question - rare talents these days.  Madelyn is also the one who says we should try X - and X is usually something that never would have occurred to me.

How are you the same?

Madelyn:  We both obsess.  Also, neither of us sleeps very well.  Wendy was one of the only Asian kids in her school and I was one of the only Jewish kids in mine, and I think that gave us some similar formative years, only with different foods and different ethnic slurs.  We're around the same age so we both have the same high school soundtrack.  Also, we recently found out that Rona Jaffe's Class Reunion was the first adultish-women's -fiction-illicit-romance-paperback novel that we both stole from our mothers.
Wendy:  The Class Reunion thing was TOTALLY FREAKY.  Yes to all the things Madelyn said, and the fact that we tend to want the same things out of life.  Also, we both tend to freak out about events that require grown-up clothing.

Madelyn:  We write very differently.  I'm one of those throw-it-against-the-wall-and-see-what-sticks people.  Wendy's much more careful and deliberate.  I suspect she has fewer drafts than my usual 18.
Wendy:  Madelyn is a Jedi-level writer and editor.  She writes:  newspaper articles, magazine features, picture books, middle-grade, young adult, poetry and adult fiction.  I write:  middle-grade.  Madelyn will forget more about music than I'll ever know.

Madelyn:  I have an incredibly long list, but here are two:  I want to publish a story that everyone tells me is "too quiet" to publish.  I'd like to finish a novel Wendy and I are playing around with (read:  just starting).
Wendy:  I have no bucket list per se.  The joint novel is a lot of fun - getting the manuscript back from Madelyn is like getting a new toy to play with.  I've also been thinking aobut writing about my mother's life; she has an incredible story that I'd love to share.

If you two could take a trip together, without your kids, where would it be?  Why?

Madelyn:  If it's a writing trip, that would be a retreat someplace in the woods where we would get in long walks and copious amounts of work.  If it's someplace purely for pleasure:  London, maybe, so we can walk in the steps of famous writers and take a ghost tour.   I'm a lousy planner.
Wendy:  ROAD TRIP!!!  Maybe some crazy kidlit themed road trip -  Metropolitan Museum of Art, Eric Carle Museum, a "Little House" site - anywhere we can find good food, great people and inspiration.  Drive all day, write at night.

What do you two see yourselves doing in ten years?

Madelyn:  Still hanging out, I hope, in about the same place we are now, only with more books under our belts and maybe not worried about finances?
Wendy:  You know, Madelyn and I started a few years ago with the same literary agent, and when that agent called me to tell me she was leaving the biz, the next person I called was Madelyn (actually, maybe Madelyn called me before I had a chance to punch the numbers).  We freaked out together, mourned and strategized.  I was so, so grateful to have Madelyn, the one person who kew exactly what I was going through.  This is a tough business, and in ten years, I hope we're still getting through the rough patches (fewer of those, I hope) and celebrating the good times (lots, lots more).

Drum roll . .  . Now our BFFs reveal what's on their fridges!

Madelyn:  I have a Kitchen-Aid.  The date on the inside says April, 1996.  I would have sworn it was older. 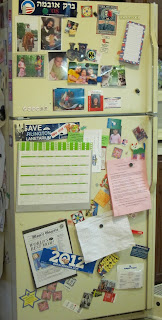 Wendy: We just remodeled, and so I have a 2012 Kitchen-Aid with the fancy drawers and bottom fridge.  I expect this fridge to last the rest of my life. 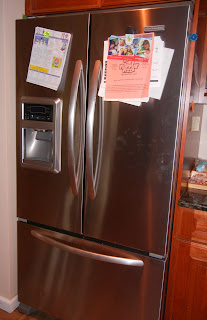 What is your favorite thing on your fridge?

Madelyn:  Aside from family pictures, I'm having a hard time deciding between my mother's chocolate chess pie recipe and my magnet of Elvis and Nixon.  Or Brandon.  I think those are pretty self explanatory, no? 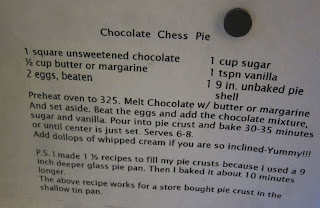 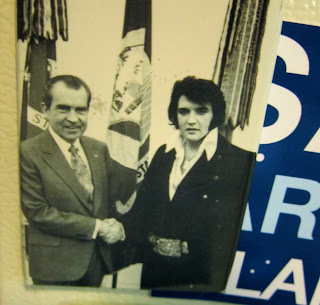 Wendy:  I am really trying to keep the front of my fridge clear, but it's just not meant to be.  Some papers are just too important to put anywhere else!  I do love those sleek little magnets that my kids found at the office supply store one day - they're playful and elegant at the same time.

Wrap it up by sharing your philosophy of life as demonstrate by WHAT'S ON YOUR FRIDGE?

Madelyn:  Chaos rules!
Wendy:  It's what's inside that counts.

Posted by Marty Rhodes Figley at 7:21 AM