"If you want a friend in Washington, get a dog."  Attributed to Harry Truman, U.S. President

People, not dogs, are politicians. But that’s not always true.  Many have forgotten about Laddie Boy, the first presidential pet to became a star.   He tail-wagged his way into the hearts of many Americans.  The dog was so popular during his lifetime that if he’d run for office he surely would have won!

Laddie Boy was “in office” during a time when the modern information age began.  The number of newspapers sold increased 75% between 1910-1930.  Movies and the radio made celebrities out of silent actors, sports figures, and even dogs.  Stubby the war dog heroically took part in 17 battles in World War I.  Strongheart was the first dog movie star.  Along with Laddie Boy, they paved the way for later animal “stars.”

Laddie Boy’s master was Warren G. Harding, 29th President of the United States.  He won the election in 1920. 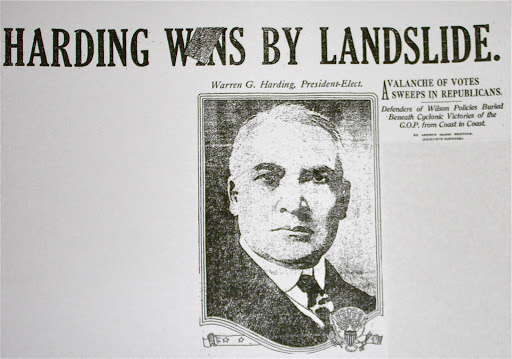 It was the first presidential election where women were allowed to vote.  Some people said the ladies voted for Warren Harding because he was handsome.  But he also promised to return the country to “normalcy” after World War 1.  Many voters were tired of the turmoil and death war brought.  They wanted to lead normal, peaceful lives again.

Born July 26, 1920, Laddie Boy was a 7-month-old puppy when he became First Dog.  He arrived at The White House on March 5, 1921—Harding’s first full day as President. The purebred Airedale terrier was a gift from one of the President’s Toledo, Ohio friends.  Laddie Boy’s father, Tintern Tip Top, was a champion at dog shows.  Even as a pup Laddie Boy seemed to know he was a “tip top dog!”

President Harding and the First Lady, Florence, loved animals and wanted to promote animal welfare during their time in office. Harding howdy-doed his new pet to several cabinet members, and then took Laddie Boy outside to show him off to the reporters.  Laddie Boy was a hit!  (Since he was a teenager, Harding had been the publisher and editor of a newspaper in his hometown, Marion, Ohio.  He knew what made a good news story!) 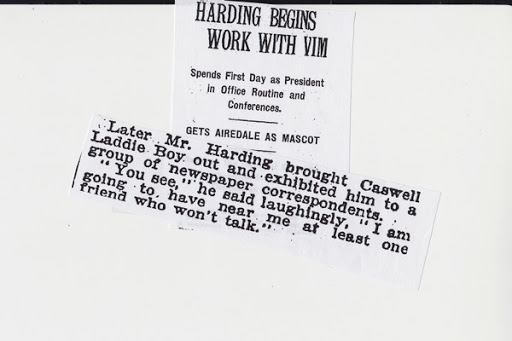 Warren and Florence Harding had no children together. Laddie Boy was their “baby.” The Hardings loved their dog, but also knew he was valuable politically as a symbol of “returning to normalcy.” What was more normal than a dog running around in your yard?

And that dog was smart!  Within days after arriving, Laddie Boy learned to fetch the paper for Warren and to retrieve his golf balls when the President practiced on the White House lawn.

Former President Woodrow Wilson’s cat was still hanging about after Harding won.  Laddie Boy decided as First Dog his duty was to chase her up a tree.  After all, it was his yard now!

Soon, the First Dog was asked to perform for the public.  Laddie Boy shook paws with hundreds of people during his time at the White House.  What a politician!

Laddie Boy also practiced shaking hands with the First Lady. (That was his homework). 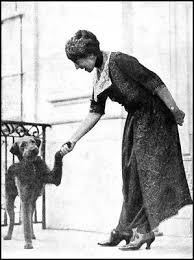 Walter Whitman, The World's Work, 1921
Newspaper publishers gave President Harding a beautiful chair made of wood from a historic battleship.  Laddie Boy, who apparently liked fancy seats, tried it out. 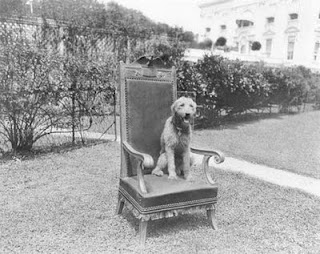 Maybe that’s why Harding had Laddie Boy sit in on most cabinet meetings. The President seemed to enjoy having a real friend there with him!

As the country’s First Dog, Laddie Boy constantly had his picture taken.  He even had his portrait painted.

Laddie Boy made many public appearances.  In May 1921, he led the “Be Kind to Animals” parade.  He rode on his very own float. 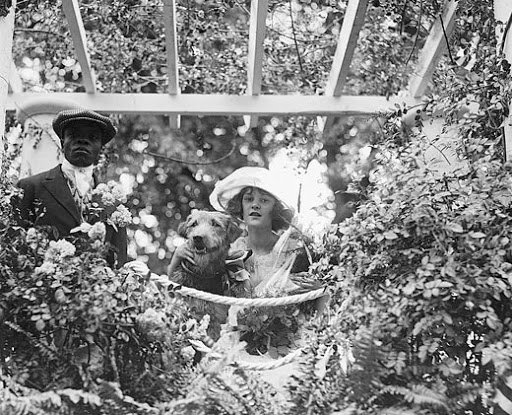 The distinguished man seated on the float was “Master of the Hounds,” William X. Jackson, who helped take care of Laddie Boy.

A fancy celebration took place at the White House when Laddie Boy turned two.  The owner of Laddie Boy’s dad sent him a giant birthday cake made of dog biscuits! Every dog’s dream. 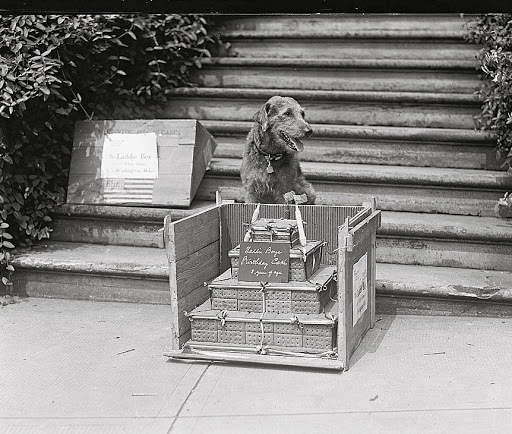 A letter arrived with the cake, supposedly written to Laddie Boy by his dad.  Many times the press pretended that the first dog, or his relatives, wrote things—then used them as newspaper articles.

Occasionally, even President Harding pretended to be his pet.  When a dog named Tiger supposedly sent Laddie Boy a message, Harding wrote back. 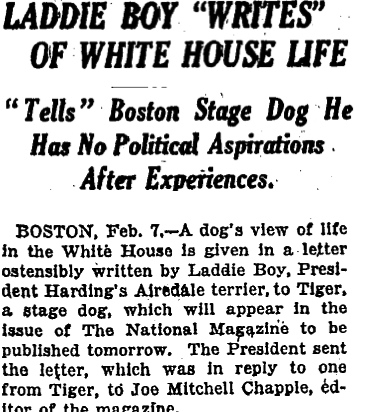 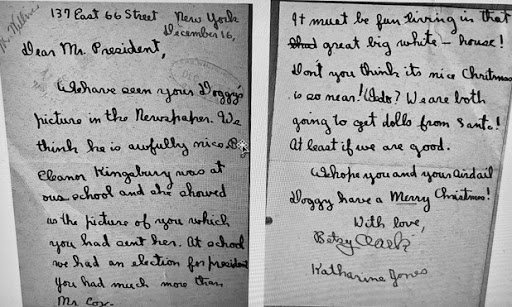 The President wrote back. 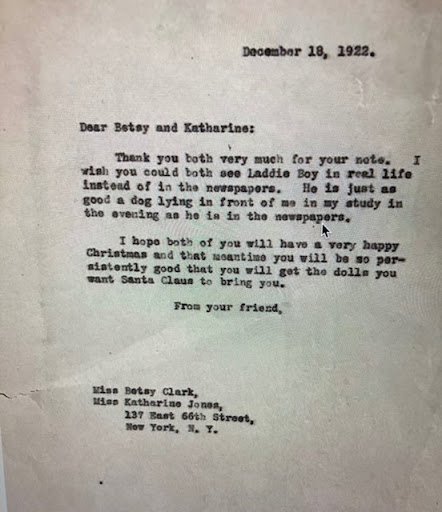 In 1923 Laddie Boy was the main attraction at the annual Easter Egg Roll on the White House lawn. President and Mrs. Harding were out of town. 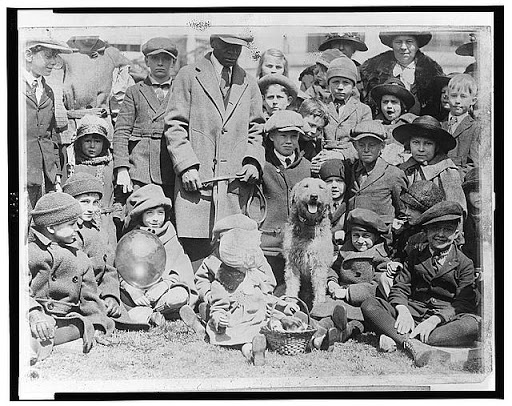 Did Laddie Boy write that he was tired of kids . . . and the annual Easter Egg Roll?  NO! 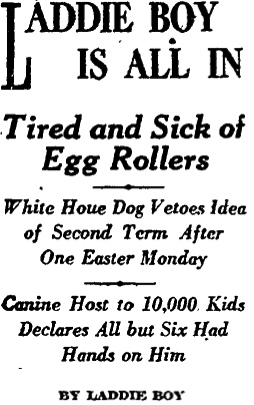 Even though Laddie Boy was First Dog of the Land, he sometimes misbehaved.  When a prize sheep named Ohio Belle visited the White House with her owner, Laddie Boy gave her the run around!  How dare she eat the grass on his lawn!

If food was around, Laddie Boy’s manners were lacking.  He regularly begged for scraps from the dinner table.  President Harding and Florence were both softies and sneaked him lots of treats!

Probably wasn’t a good idea.  A company named their chicken dog food after the First Dog! 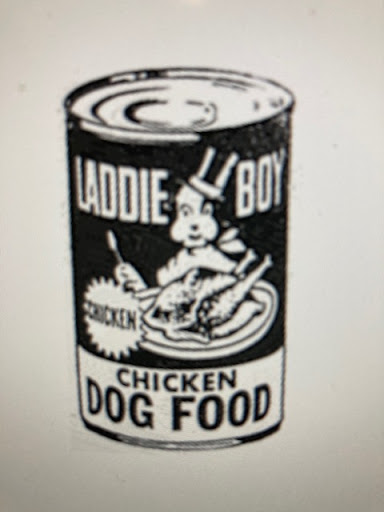 Laddie Boy missed his best friend when he traveled.  On April 9. 1923, he joyously greeted Harding after he returned from a presidential trip to Florida. 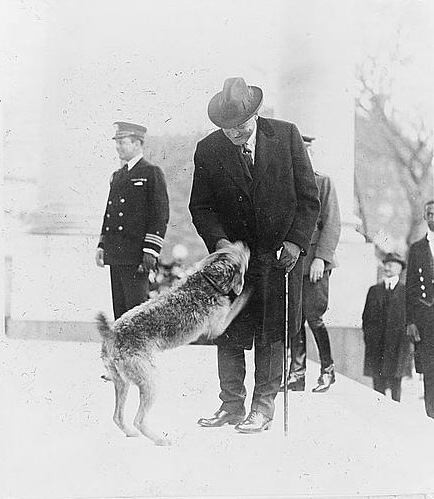 Warren Harding was a good master, but like most of us, he wasn’t perfect. He gave some of his friends important government jobs, and trusted them to do the right thing. The President was loyal to them when he should have seen they were crooks.  He forgot that some people weren’t as loyal as his dog was."The Teapot Dome Scandal" would be linked to the President's name forever.

The President decided to take a train trip across the country to Alaska in June 1923.  He wanted to tell the American people of all the good things his administration had accomplished.

His economic policies helped end the Depression by 1921. Harding created the Bureau of the Budget, limited arms, and signed a treaty with Germany and Austria formally ending World War 1.  In 1921 he gave a speech at the University of Alabama urging an end to racial injustice.  It was the first time a president had spoken about race in the South since the Civil War.

Harding planned to be away for two months. 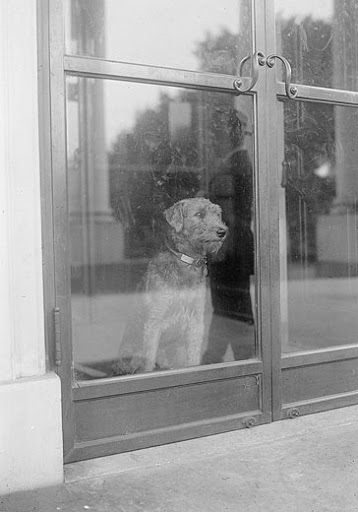 Laddie Boy waited for his return.  But he never came back.  On August 2, 1923, Warren Harding died of a heart attack while he was in San Francisco.  He had been President for less than 2 ½ years.

Laddie Boy surely missed his master who had been such a kind and caring friend.

Finally, Florence and Laddie Boy both left the White House forever.  Laddie Boy’s last official act as First Dog was to greet the new President—Calvin Coolidge and his wife.  Warren would have wanted him to be a good sport.

After that, Laddie Boy retired.  For the rest of his long, happy life, he lived with Florence’s favorite Secret Service agent, Harry Barker, and his family in Newtonville, Massachusetts.

Because he fetched the Hardings’ newspaper, Laddie Boy had been called a “newsboy.” The real newsboys of America (young boys who sold newspapers on street corners) donated 19,134 pennies to be melted down and made into a magnificent life-sized statue. (Now, that was when a penny was worth something!)  He had to pose 15 times for the artist Baska Paeff. 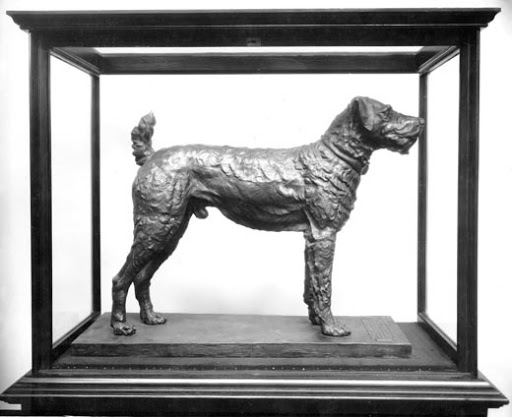 In 1927 the bronze statue of Laddie Boy was presented to the Smithsonian Institution, and is included in the collections of the National Museum of American History.

Laddie Boy’s widespread popularity was a result of the America’s newfound fascination with celebrities as well as the President and Mrs. Hardings’ efforts to promote their dog and the animal welfare movement.  But it was also because Laddie Boy was an intelligent, handsome, charming, friendly, well-trained dog.   For a few glittering years an Airedale terrier from Ohio enchanted the press and the public.

Laddie Boy was indeed The First Dog of the Land—and a great politician!

The old newspapers and photos I used in Laddie Boy’s story are primary sources. People who had first hand knowledge of the events they wrote about and photographed made them.  They lived at the same time as Laddie Boy.

Primary sources are a wonderful way to study history. Become a history detective and explore those primary sources for treasures from the past.

That’s how I came to know and love the great Laddie Boy.

Posted by Marty Rhodes Figley at 10:00 AM