One of the many benefits of marriage is acquiring “new cousins.”  Especially if they are as fabulous as Theresa Van Goethem.  For the first time in many years, she and her delightful husband Danny visited us last weekend.

Theresa is an educator extraordinaire.  Although she looks too young for this statistic, she has spent 37 years of her life working for the Kansas City, Kansas Public Schools. She is the Elementary Special Education Coordinator for the Wyandotte Comprehensive Special Education Cooperative, and works with educators in over 30 buildings who provide services to children with special needs.
Wyandotte County is home to 157,000 people and includes Kansas City, Kansas, Bonner Springs and Edwardsville, Kansas. There is a fascinating website on its history of the Wyandotte Public Schools which spans 167 years.  In 1844, the county’s first free public school opened in what was then "Indian Territory."  It served both American Indian and white children. 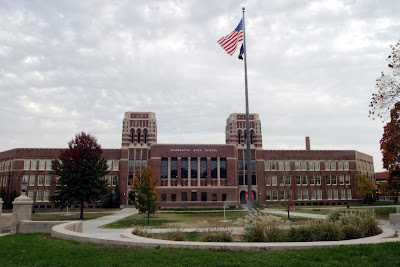 Several years ago, every school building in this historic district was renovated.  Wyandotte High School (built in 1937 under Franklin D. Roosevelt’s WPA plan after the original building burned down) is an architectural beauty with dual fireplaces in the main lobby.  Its renovation presented special challenges since it was on the Historical Registry.  The drafty windows (985 of them) were replaced in a “painstaking manner” (pun intended).  Theresa said that the job was so well done that a few people called in asking why the old windows were still there.

Theresa (known as "Van" in her school district) is most proud of working with parents and educators to provide the best services possible for the students.  She firmly believes the urban youth of her district deserve the highest quality educators available.  Their goal is to be one of the top ten districts in the United States.

A few words of wisdom from Theresa:
“When parents and educators work together – making decisions based on the needs of the child (not the adult) then the child will be successful.”

Check this out:  A video featuring students selected from the music departments of four schools in Theresa's district.   (A "thank you" from the Black Eye Peas Tour when they used the John Lennon Educational Tour Bus.)
Posted by Marty Rhodes Figley at 12:32 PM